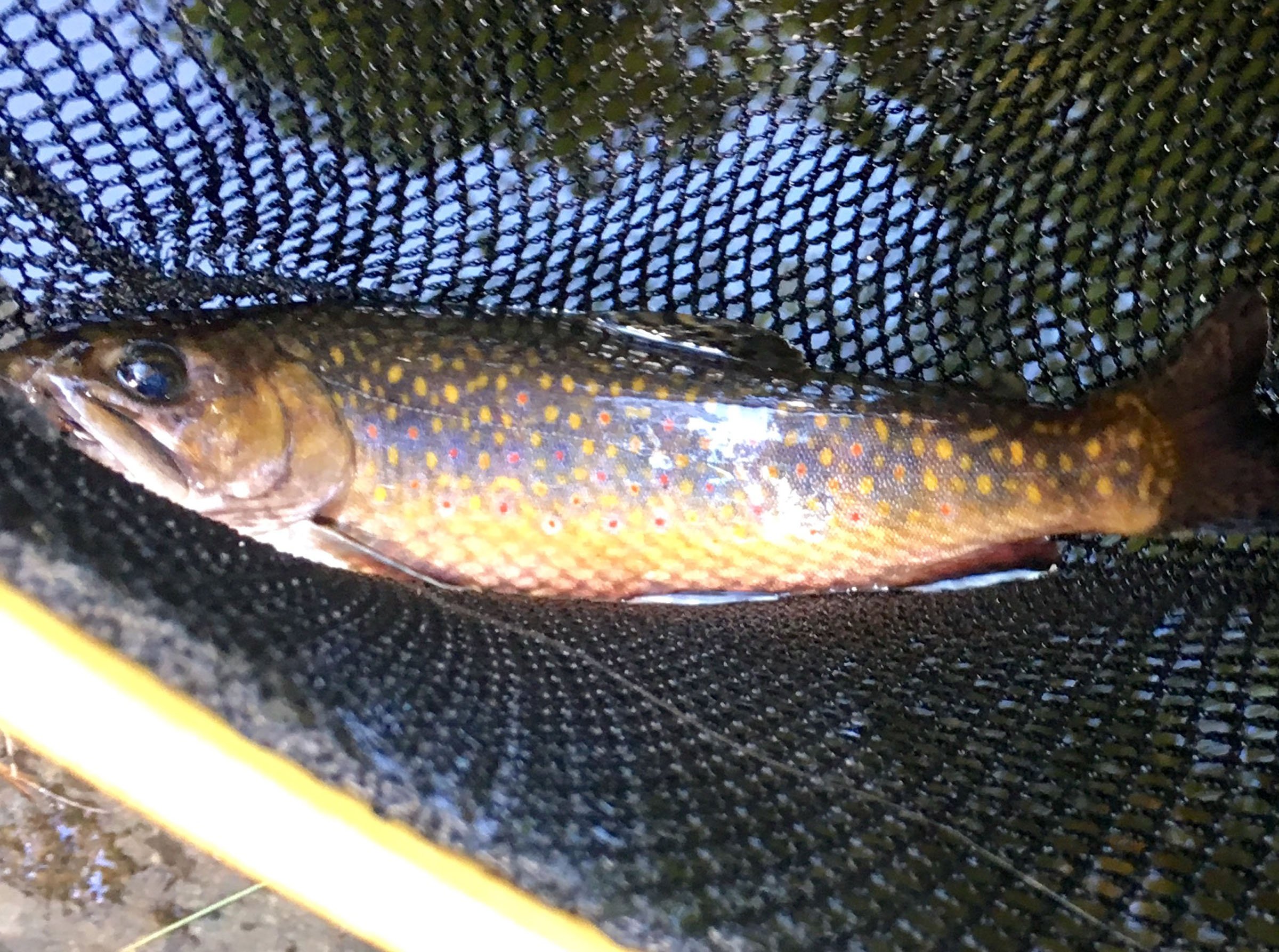 I finally made it to a special brook that has been on my list to scout for the elusive, wild sea-run brook trout of Massachusetts. The sea-run brook trout, or salter as we refer to them here in New England, are a very special fish. The salters hatch in freshwater brooks, streams, and rivers and then travel to the sea to feed and grow and then return to the freshwater to spawn. 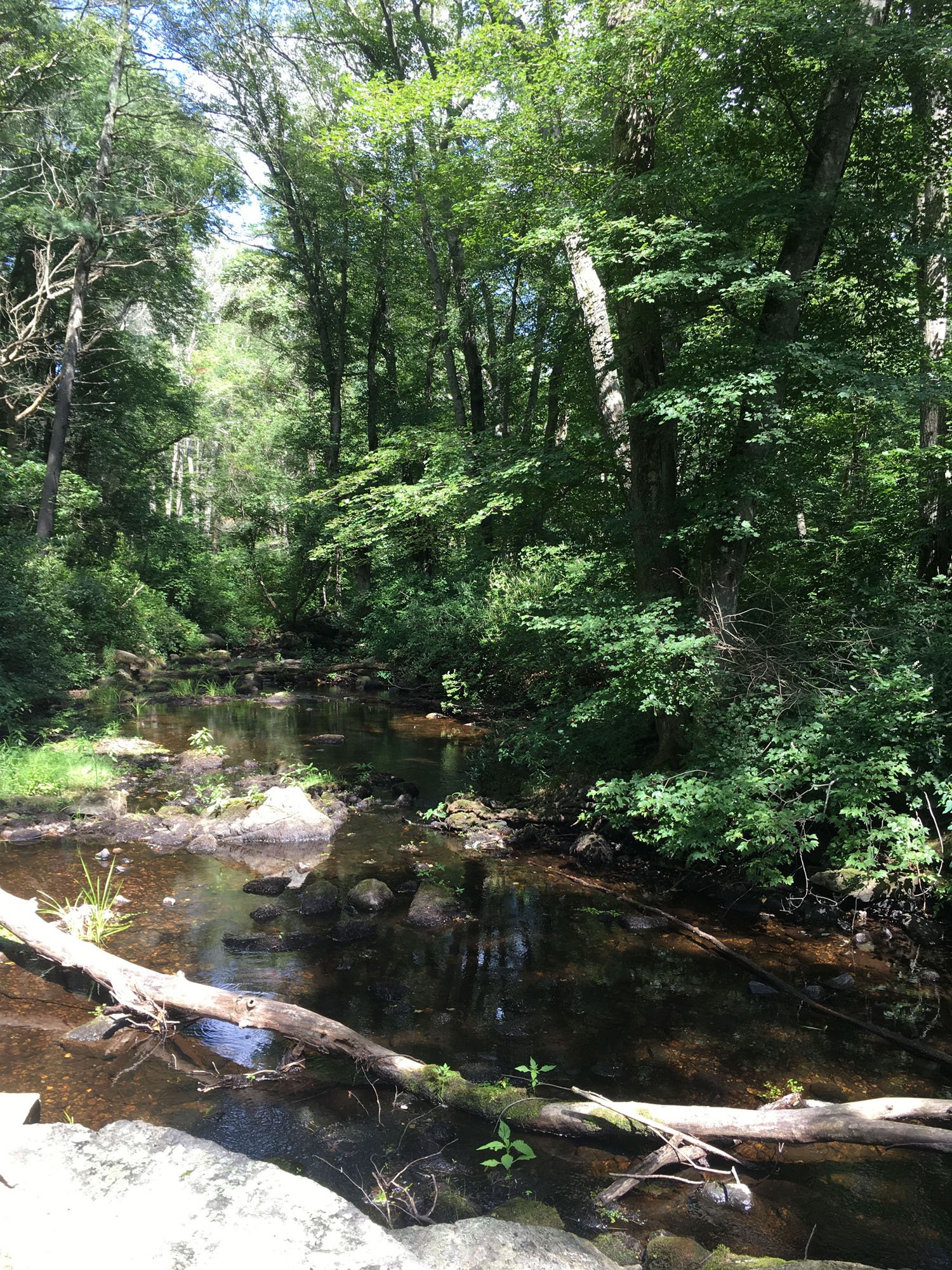 I have been spending a lot of time researching and studying our native brook trout, but I haven’t had any real success landing one. There is a reason that these special fish have survived the Industrial Revolution and all of mankind’s destruction in the name of progress. These fish spook very easily, and they are very picky when it comes to chasing flies. Stealth and patience is required when chasing these beauties.

So last Sunday, on the day before our 18th wedding anniversary, my lovely wife agreed to spend the day with me fishing for salters in a little known brook in Southern MA. She must have been tired of listening to me talk about these special fish… that and the fact that I also agreed to take our two dogs and do some walking along the nearby trails. She is a wonderful woman who understands and supports my angling pursuits. I will have to think of something special to make up for this one.

When we arrived at a parking area that holds about five cars, I jumped out of the car and grabbed my tenkara gear like an excited kid going to the amusement park. Of course, fishing tenkara requires minimal gear. For outings like this, I only carry an Orvis sling pack, a small net, and of course my RBT One tenkara rod. No waders and boots necessary for this little brook, but water sandals are a good idea. So we gathered up the dogs and headed for the trails with Dixie, our little Italian Greyhound Chihuahua mix leading the way. This little pup loves to walk the trails and is a bit of a hunter. Her pack mate, Roscoe, is the same mixed breed, but he likes to hang back with his humans. The trails along this brook are very tight with lots of vegetation on the sides and above. It was a very hot and humid day, but on the trails there were some relief in the shade. The walking is a little difficult as the ground is muddy and loaded with tree roots. 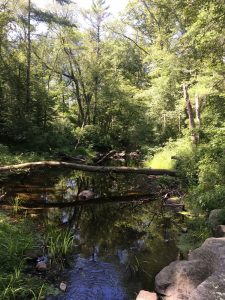 A short distance from the parking lot, at the first bend in the trail I spot some really big rocks on the edge of the brook. Below the rocks is a small pool that looks like an ideal place for the salters to hang out. I already have my RBT One rod set up with a furled casting line, a couple feet of tippet, and a caddis emerger bead head fly. I set the rod at its shortest length, just under eleven feet because of the tight canopy of trees and make a short cast upstream. The fly lands gently upstream of my intended target and I let it drift downstream. I kept the casting line off the water knowing how smart the salters are and let the fly drift naturally with the stream.

As the fly drifted right in front of the rock I was standing on, I saw a salter take notice. He was right below me under the cover of the rock I was standing on and went for the fly as it drifted by. I saw him take the fly and quickly raised the rod to set the hook. The excitement was unbearable as I started to direct him towards the net and handed my wife my i-phone to get a picture. I finally landed the most amazing fish in our region. I carefully netted him, removed the fly, and briefly admired his awesome colors before setting him free. My wife was laughing at my child-like excitement as we continued on down the trail.

Catching a wild sea run brook trout is an awesome experience if you take the time to reflect on what these fish have overcome. Thankfully there are groups like the Sea Run Brook Trout Coalition that are doing heroic works to ensure that future generations can experience these amazing fish. They are making strides by removing dams, using volunteers to restore streams, and of course, educating the public. I urge every angler to support their efforts by donating or volunteering their time. You can visit their site at www.searunbrookie.org 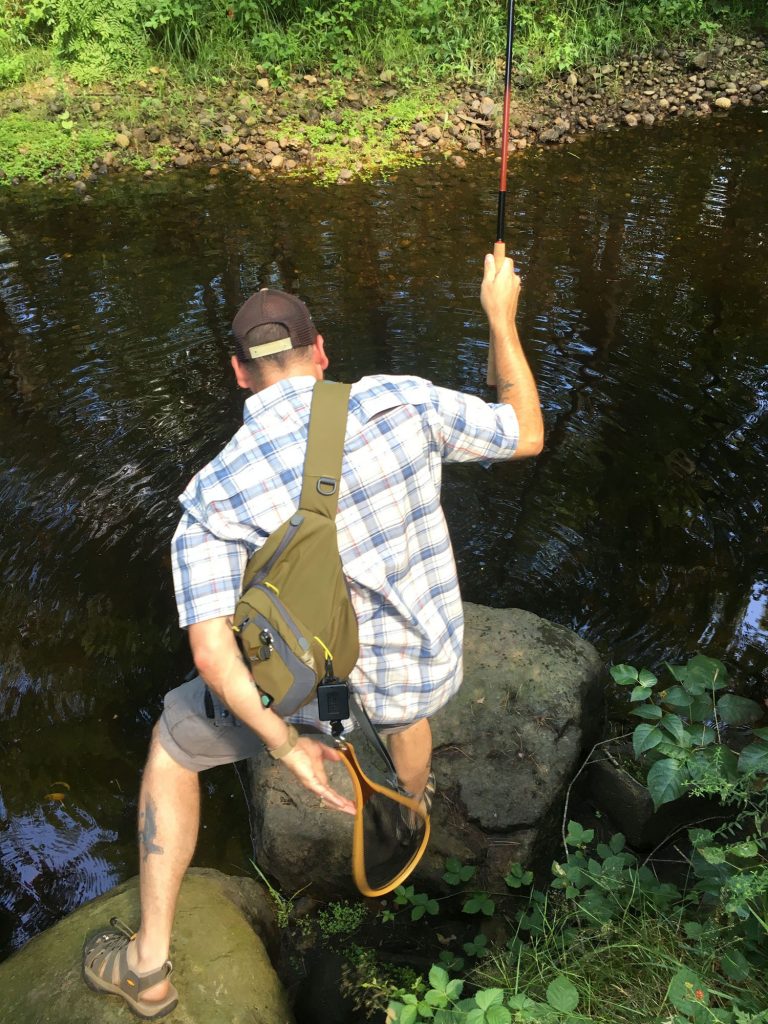 As we made our way downstream via the trails, I made several stops to cast and try for more salters. Along the way, we met a really nice couple who said they fish the brook all the time. They were locals and told us how special this place was and that you could spend several days there and not catch a single fish. I told them of my luck on the first cast here, and they shared in my enthusiasm. They asked about the tenkara gear so I gave them a quick demonstration, not wanting to sound like a sales pitch. They mentioned that I was travelling light, and I said that’s the beauty of tenkara. Travel light and keep it simple. I gave them a card so they could check out our website if they so desired, and we continued on down the trail looking for the next good location to cast a line.

We found another great looking spot with good hiding spots for salters and more depth. I lost the bead head I was using earlier and decided to go with a kebari or tenkara fly. I chose a pheasant tail kebari because I’ve had a lot of luck with this particular fly this season. After several casts without any signs of salters, I decided to use a pulsing method that many tenkara anglers use. I cast the fly downstream and began to pulse forwards and backwards with short arm movements against the gentle current. A kebari fly has a reverse hackle, meaning the threads/feathers go in the opposite direction. This gives you the opportunity to use the hackle as a parachute and can be very effective in attracting fish. After a few casts, another salter took notice and went for the kebari. I set the hook immediately and landed another beautiful salter. After removing the fly I gently set him free, remembering how special these awesome fish really are. We only spent a short time at this special little brook, but this was a day that I will remember for a very long time. My only regret was that I didn’t have the Go-Pro on and that I didn’t take better pictures. 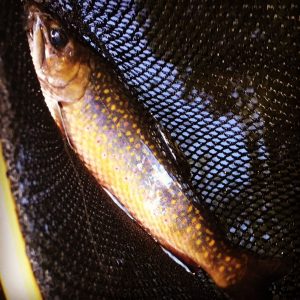 Thank you to my beautiful wife for being my best friend and supporting my outdoor pursuits as I drag her to all sorts of out-of-the-way places. I’m looking forward to the next eighteen years.

No reel, no problem…Bill Holleran 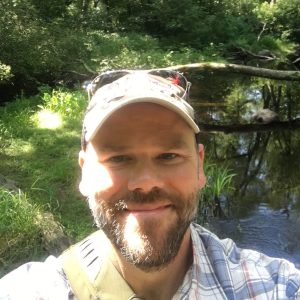