A Son’s Introduction to Steelhead Fishing 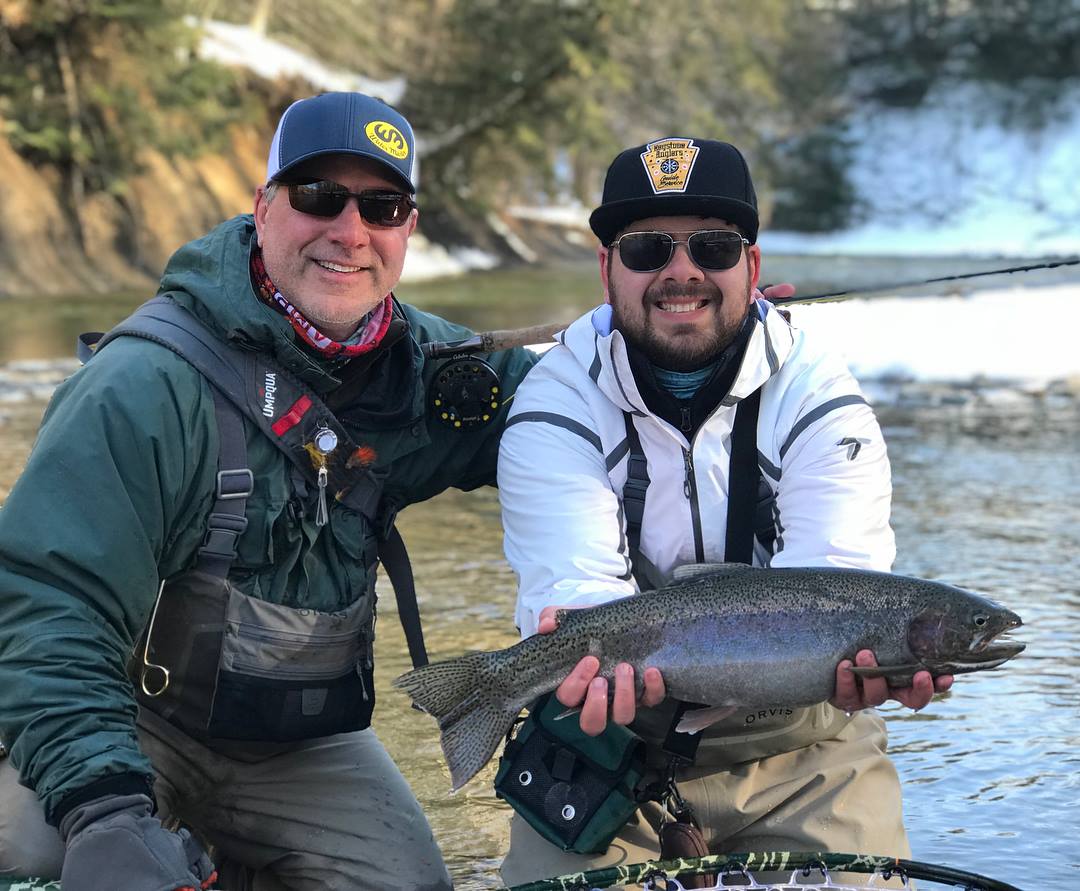 I had the privilege of guiding Rob Giannino from Fly Fishing Journeys and his son Tyler for Tyler’s first ever trip to Steelhead Alley. Day one found us on the stream just after daybreak. The air was cold with a little ice on the edges of the stream with near perfect flows and color. We started in a very productive run that I pre-fished the day before and that I knew contained fish. I started Tyler with a size 12 white Muddy Buddy and gave him some stream side instruction on how to use it. It wasn’t long before Tyler was off and running. I like to carry an extra rod with a different looking fly to minimize downtime on a lost rig or to be able to switch flies very quickly. I took a few minutes to tie on a drop shot rig with a Squirmy Wormy while Tyler fished. After a half hour or so and no takes I decided to move to another location that also held fish the day before. 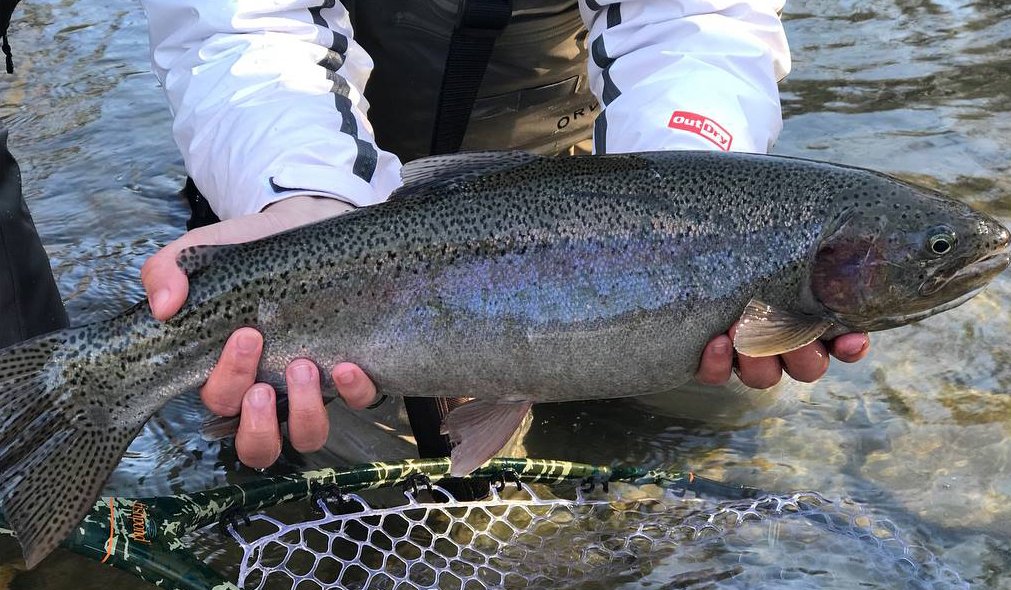 This next spot is a deep pocket of water that is surrounded by hundreds of yards of shallow water, so it normally holds a fish or two throughout the season. I started Tyler off with the Squirmy Wormy rig and within his first several casts he was hooked up with his first ever Lake Erie Steelhead. Tyler was very excited, and his father Rob was glowing with pride. Watching this scene is truly why I guide, and it will never get old.

We continued upstream and fished one of my favorite stretches on this particular body of water. We spent a few hours fishing this spot with Tyler coming close but not connecting so we decided to head to the first spot we tried earlier in the day, Tyler was back dead drifting his all white Muddy Buddy when all the sudden a very large Steelhead attacked his fly. Tyler set the hook and the fish screamed through the drag. Unfortunately, this fish was a seasoned pro and had a few tricks up his sleeve and we had our “one that got away” story. 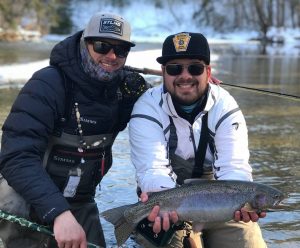 We had a little more time left in our day, so I decided to take Rob and Tyler to another location a short drive away. We parked and walked about a half mile downstream to a waterfall hole that always seems to have some fish. I set up Tyler with the Muddy Buddy again and he started fishing the waterfall like an experienced fly angler and before we knew it Tyler was fighting a chunky Steelhead hen. After a few quick pictures we released the fish back to her waterfall home. What a great way to finish off our day.

I decided to start our second day off in the same place we finished the day before. I had seen some fish around and I was confident we would catch them. We went directly to the waterfall hole and fished it long and hard…but not a single bite. I was seriously doubting my decision to bring the guys here. We moved upstream to another location that “always” seems to have fish but after several hours of hard fishing we had nothing to show for it. We continued to fish our way back upstream and closer to the vehicle and closer to a fish less day that all guides dread. Nice run after nice run both Rob and Tyler fished hard and thorough but no fish. 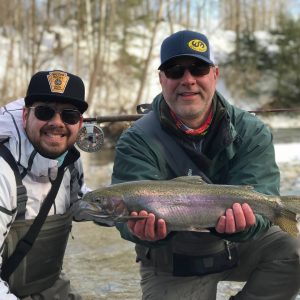 I remembered one last spot that I caught a big male in the week before and with daylight fading I marched the guys to it. I showed Rob the run and he placed a perfect cast directly under an overhanging branch as we both watched his indicator drifting drag free down the center before stopping. Rob without hesitation set the hook and we had our first fish of the day hooked up. After several minutes of drag screaming runs we had the fish in the net and we weren’t fish less anymore. Rob said that he was happy, and they would be content with ending the day and I said “absolutely not get back out there”. Rob laughed and went straight back to his run. Rob again sent his pale tan egg rig into the same exact spot and just like before we watched his perfect drift come to a halt as Rob set the hook. This time he was hooked up with a gorgeous colored up male Steelhead. We snapped a few pictures then released the fish. After netting that fish it was Tyler’s turn and it wasn’t long before he too was hooked up. Rob gave me the look of “should I try again”, and I didn’t even need to tell him as he made his way back to the run. For a fourth time in a row we were hooked up and fighting an angry Steelhead. With the dark upon us Rob & Tyler took a few more casts and caught and landed two more fish. What an incredible end to the day as well as the end of an awesome Father/Son fishing trip. I’m sure Rob and Tyler will never forget their first trip to Steelhead Alley together. 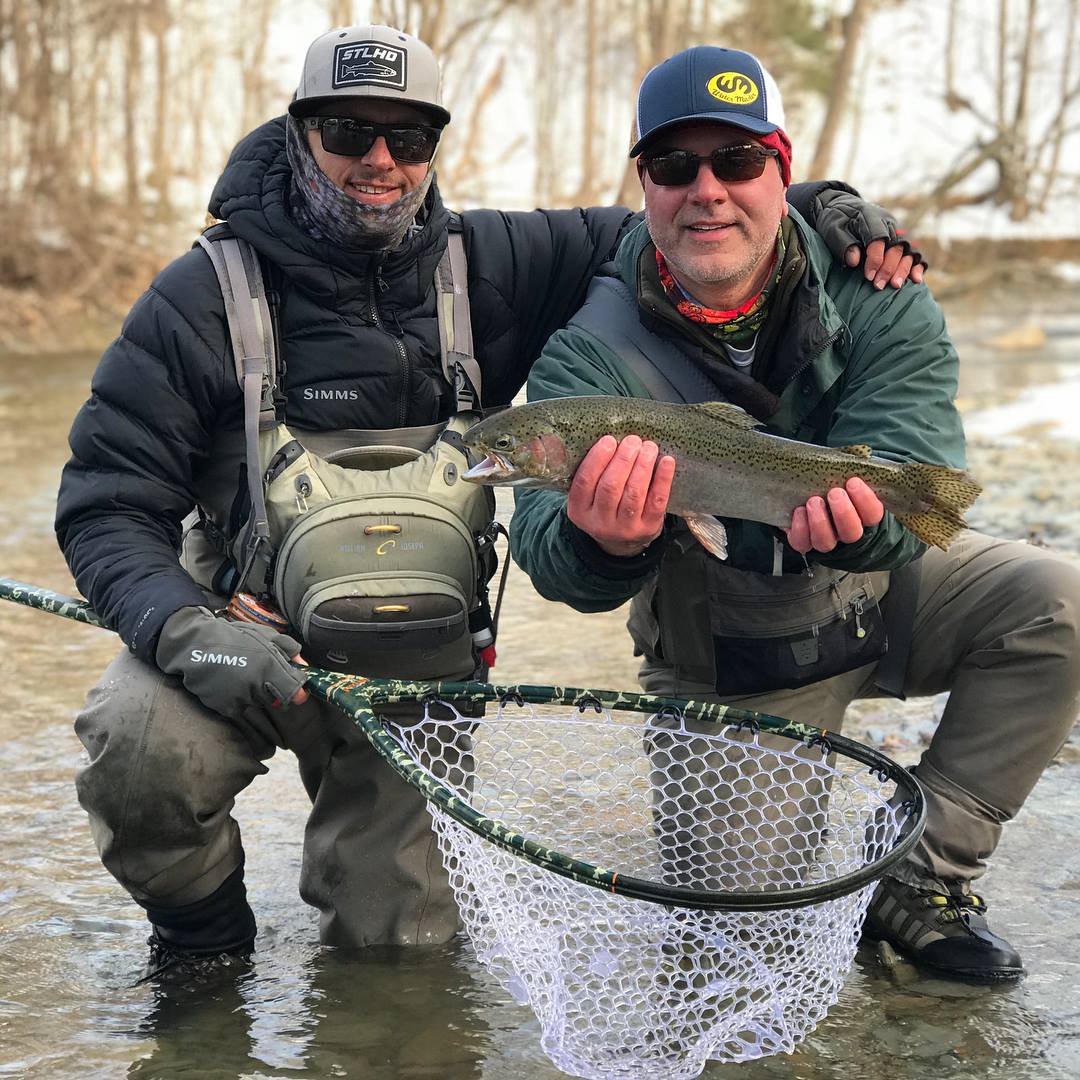 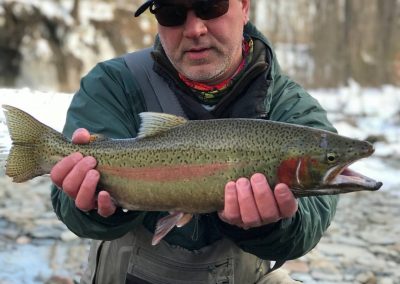 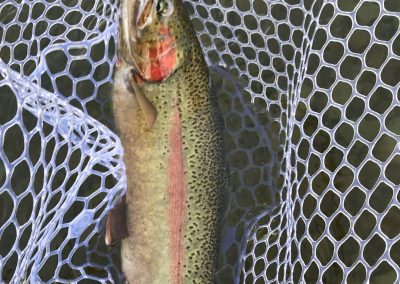 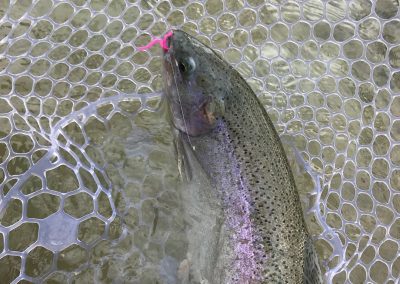 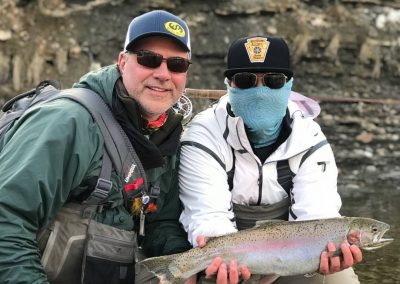 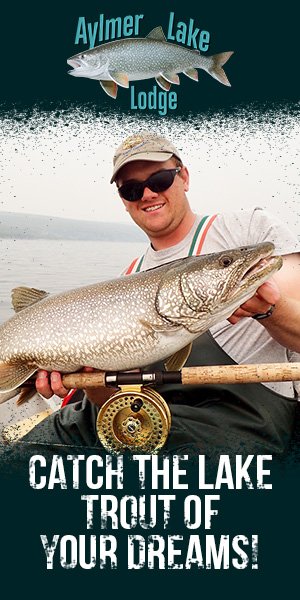