The Rapid River: A Touch of Old Maine 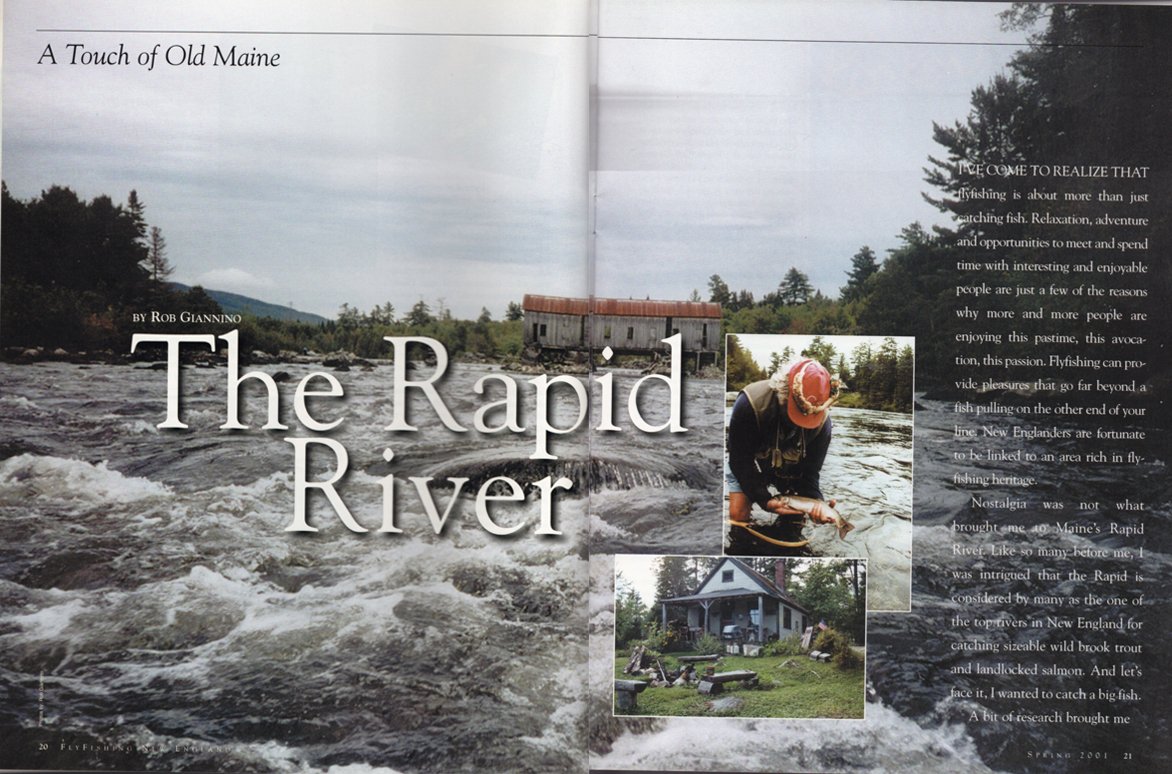 I’ve come to realize that flyfishing is about more than just catching fish. Relaxation, adventure and opportunities to meet and spend time with interesting and enjoyable people are just a few of the reasons why more and more people are enjoying this pastime, this avocation, this passion.  Flyfishing can provide pleasures that go far beyond a fish pulling on the other end of your line. New Englanders are fortunate to be linked to an area rich in flyfishing heritage.

Nostalgia was not what brought me to Maine’s Rapid River. Like so many before me, I was intrigued that the Rapid is considered by many as one of the top rivers in New England for catching sizable wild brook trout and landlocked salmon. And let’s face it, I wanted to catch a big fish. 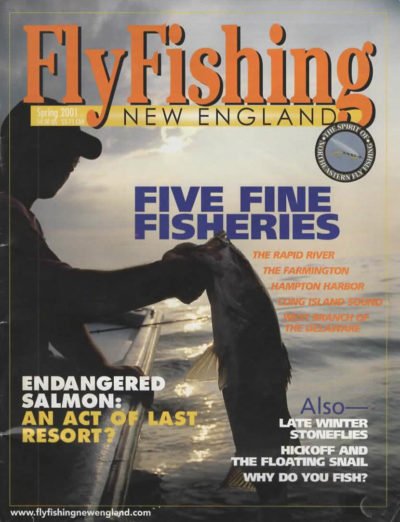 A bit of research brought me to Rapid River Fly Fishing. When I reach the proprietor, Aldro French, he asked me what my interest were in when I hope to experience. By the end of our our conversation, I booked a trip for mid-September. Aldro also recommended a book called We Took To The Woods, by Louise Dickinson Rich, as it was written about this exact area. I awaited my trip to the Rapid River with great anticipation.

My initial destination was the Magalloway River Inn, located just a few miles north of Errol, New Hampshire at a wide spot on Route 16 known as Wentworth’s Location, less than a mile from the Maine border. The Inn is a good launching point for people coming to fish the Rapid for the first time. If you are arriving after dark, this is a great place to spend the first night and head down to the river in the morning. In fact, the Inn is a wonderful destination in itself. Coming in from points south on Route 16 takes you past long, inviting stretches of the Androscoggin River. The Magalloway itself is around the corner from the Inn and the Rangeley Lakes area is just up the road. Another trip for another time.

I met Dick Walters at the Inn and we drove down to the river together. I learned that Dick serves as the council chairman for the six Maine chapters of Trout Unlimited. His passion for trout conservation, protection and restoration was obvious. He acknowledged with great satisfaction, that the Rapid River is now flyfishing only, with brook trout restricted to catch and release. From opening day until August 15, the daily bag limit on salmon is one fish. From August 16 to September 30, the salmon are catch and release. There is no size or quantity limits on bass throughout the open season.

Over the past few years, three factors have contributed to the quality fishery the Rapid is today. First, higher minimum flows from Middle Dam have allowed insect life in fish to thrive. Second, the progression towards catch and release has offset the growing number of fishermen on the river from substantially impacting the fish populations. Finally, the elimination of ice fishing in portions of the north basin of Umbagog Lake, where Rapid River brook trout are believed to winter over. This measure was adopted after significant numbers of large brook trout were taken through the ice. As Forest Bonnie, the area’s fish biologist explains, “It didn’t make sense to protect the trout all summer just to have them take through the ice in the winter.” 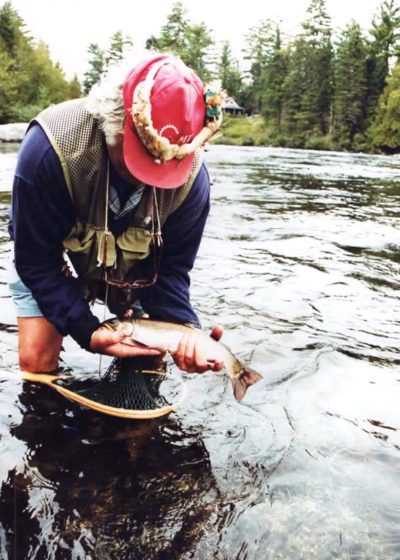 One of the intriguing aspects of this river is how difficult it is to get to. From the north you can come in through Route 16. From the south you go through Upton. Both sides are gated in require a hiking in. From South Arm, you can access the river using a boat or canoe to cross Lower Richardson Lake. Caution should be taken here as this is big water and even minimal wind can cause difficulty for canoes. I recommend staying at one of the camps along the river. As opposed to a one-day hike in trip, staying on the river for several days affords a deeper appreciation for the river, it’s surroundings and it’s history, while putting you were short cast from some truly spectacular fishing.

Our journey through the woods to the river took about an hour.  Along the way we saw several large deer in some partridge. At the end of the ride was the camp, right on the river. Any closer to the water and I would have to sleep in my waders. The entire property is known as Forest Lodge. The main building, known as Summer House, holds several sleeping rooms, essential gathering den with a large fireplace, kitchen and dining area. In the den, Aldro pointed out the old typewriter on which Louise Dickinson Ridge wrote her books, including We Took To The Woods. While I’d known the book was about the area, I didn’t realize it was written in that very same lodge I was staying in. As the light of the day begin to disappear, I stare down across the river from the porch of the Winter House, looking upon Lower Dam. A sense of the area’s history begin to blossom, but that would only grow as the next few days unfolded.

A Passion of Place

Louise Dickinson Rich’s passion for these Maine lands comes through in her eloquent and evocative words of woods and waters. “I like to think of the lakes coming down from the north of us like a giant staircase to the sea,” she wrote. “Kennebago to Rangeley to Cupsuptic, down they drop, level to level, through short, snarling rivers; Mooselookmeguntic to Richardsons to Pond-in-the-River, and through the Rapid River to Umbagog, whence they empty into the Androscoggin and begin the long southeasterly curve back to the ocean.  I like to say their names, and wish I could make you see them – long, lovely, lonely stretches of water, shut in by dark hills.” 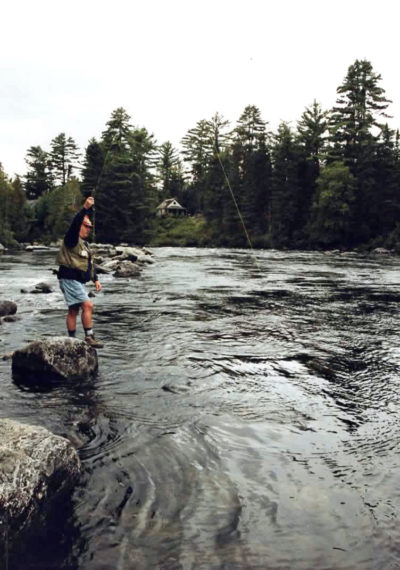 “Snarling” is a perfect depiction of the Rapid. Dropping 185 feet in 3.2 miles, the Rapid River connects Lower Richardson Lake, the lower most Rangeley Lake, to Umbagog Lake in New Hampshire. The river begins at Middle Dam, flows .6 miles to the famous Pond-in-the-River and continues west to Umbagog Lake. As the river turns, winds, drops and falls, some beautiful pools have been created. Long Pool, Cold Spring and Smooth Ledge were just a few of the pools that produce fish. Both Middle and Lower Dams also produce hard fighting trout and salmon.

Typical northeast hatch patterns are found on the Rapid throughout the season. In the fall, look for a big stoneflies hatching in the afternoon. Large stimulators in adult stonefly patterns will provide plenty of dry fly action. The hot fly on this trip was Bob Swanson’s stonefly, tied by local tier Doug Mawhinney.

Since the home of Carrie Stevens, creator of the famous Great Ghost, is just up the road apiece, be sure to have plenty of streamers on hand. I enjoyed tying on a big, buoyant dry fly like a White Wulff or a Stimulator, adding about 14’ of tippet to the bend of the hook and tying on a smelt pattern as a dropper. I used the dry fly as a strike indicator and fished it dead drift. The smelt pattern will zigzag back and forth in the current. This method can be particularly effective below a hydraulic dam like Middle Dam as the darting streamer looks like a baitfish stunned by the churn of the dam.

Fishing is a medium that connects generations. The Rapid River is unique from the perspective that it’s wonderful history is equaled by it’s awesome fishery. Spending time in the Maine woods, hiking and fishing the Rapid, was a refreshing experience. Time spent with Aldro French and learning about the history of Forest Lodge offered me a connection to a special place from a different time. A place and time I won’t soon forget.